One of the largest parts of the Every Barn project has been to create new exhibition panels for the Keld Resource Centre. We’re pleased to say that these are now ready to be installed – along with a built-in audio player so we can share some of the voices of the people who have taken part in the project. The interior of the main exhibition room has been fitted out like a cow byre so the panels will work perfectly in the space.

Each panel covers a different aspect of the project, from the historical origins of the unique barns and walls landscape to the Muker Barns restoration project that has been running parallel to the Every Barn project.

We’ve just been sent this wonderful photo of Billy Hutchinson’s dad Bobby with one of his milk cows, a northern dairy shorthorn, near Kisdon Hill. They started off farming from the Cathole Inn, then moved to nearby Keld Green farm where they had quite a large dairying operation for the time.

Billy Hutchinson told us about the family farm’s cowhouses and described milking cows outdoors in the summer:

“[How many cow’usses came…] with Keld Green? One, two…we had five. Each one would have its own meadow and each one held about three or four [cows]. Wintered there, yes. Then of course, in summer time when the cows went out, the milk cows went out. They went right onto the top of Kisdon and me dad used to go on up there on a 1927 motorbike with backcan on and milk the cows b’hand and I was also, when I was about 14, 15 year old, I had to go on another motorbike up with another backcan, because we were milking about 8 or 9 cows then, and that was our sole income. Our milk really was the main income. [Could get all the milk into two backcans?] Yes, two back cans, then bring em back down to the farm, and then they were cooled, put in kits and out for the milk wagon for collection the next morning… no tanker, just cans.”

We were very excited this morning to find the first three of our six trail booklets had arrived.

We think they look fabulous and we can’t wait to get them out and into the hands of local visitor businesses for their clients to use.

Each one has a lovely clear route map plus descriptions and photos of all the cowhouses along with their stories and the memories of people who used them. The perfect souvenir of a visit to Upper Swaledale.

As well as giving local businesses copies to loan out, we will also have copies of all six for sale at our Reeth National Park Centre, based in Hudson House at the top of the Green.

The first samples have arrived using Helen Peyton’s lovely linocuts of old butterstamps – an essential piece of equipment in the Swaledale farmhouse dairy. Butter would have been a sought after product from farmers in upper Swaledale and sold or exchanged for staples like oats and barley.

Bit of work still to do we think but not bad for a first attempt. We’re using Snapfish if anyone is wondering 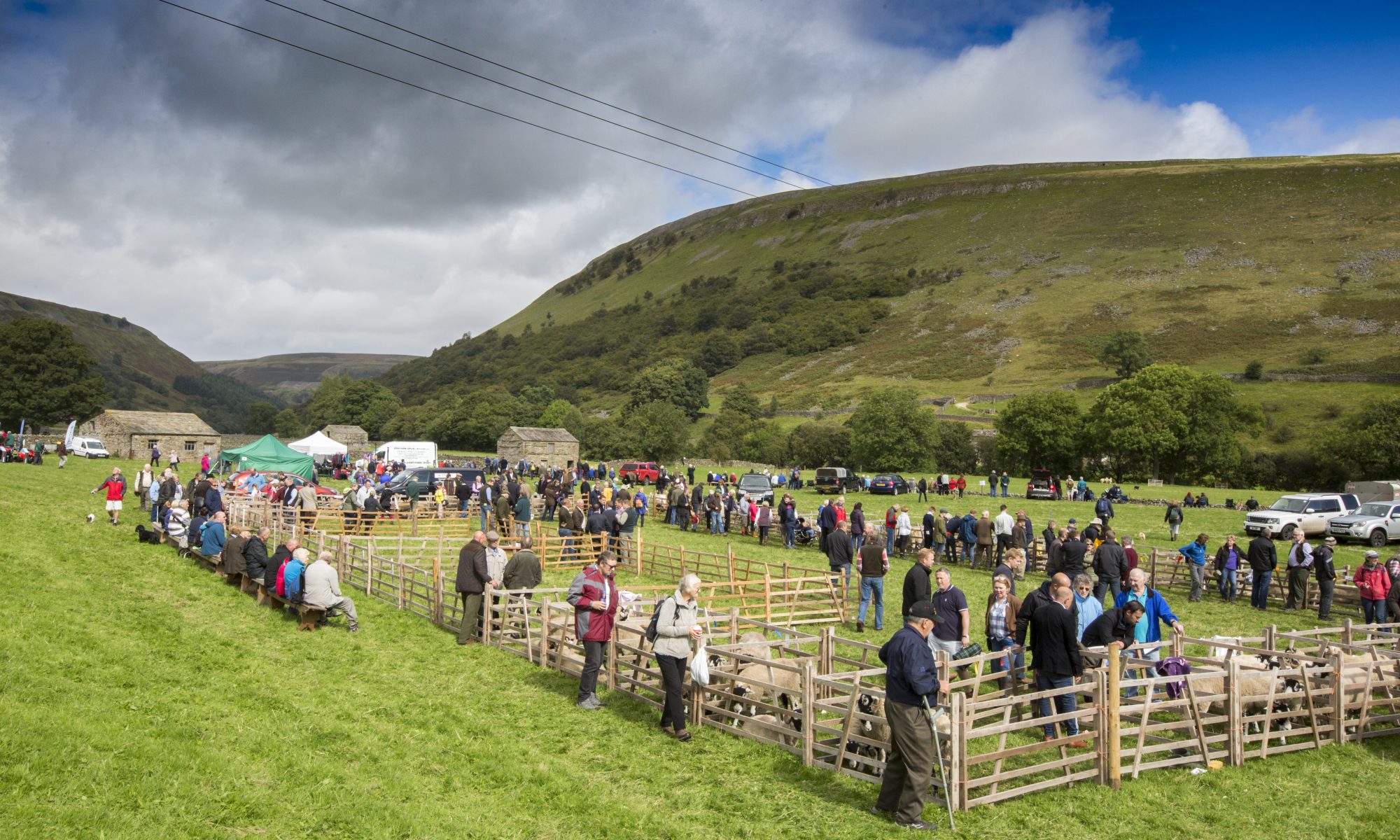 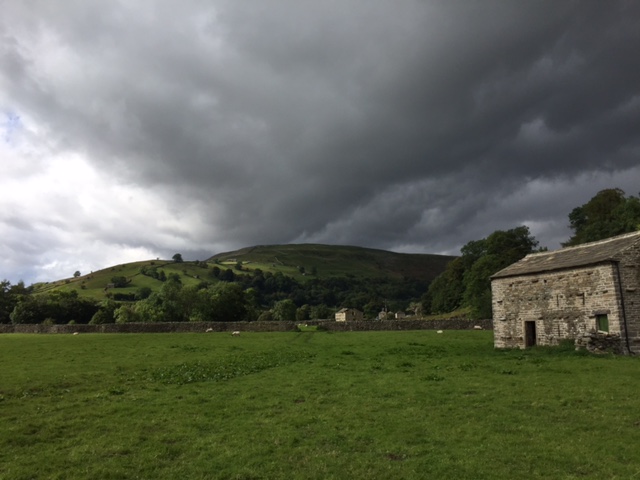 We had our last day of filming yesterday up at the newly restored Great Rampsholme cowhouse. We dodged hailstorms and high winds but hopefully managed to capture some really interesting footage. Our archaeologist Miles Johnson was there to talk about the Muker Barn restoration project which he has been managing and also why it is the the Yorkshire Dales National Park Authority sees the barns and walls landscape of upper Swaledale as such an important part of the national park’s ‘offer’ to visitors.

The interior of the cowhouse on Great Rampsholme meadow has also been magnificently restored using traditional woodwork skills and limewash. We’re hoping to open up one of the doors so that visitors can see into the building and admire all the original features, even down to the cattle neck chains still attached to the wooden rudsters and the pole used to stop pairs of cows tied side by side from bumping into each other.

Handmade Parade are joining us next month to run two workshops for children making ghost calf lantern/puppets for the project celebration in November which we are calling Ghost Cow Night. All welcome – details on the poster below:

Glenda Calvert has been working on a children’s ‘Every Barn…’ walk leaflet with a group of local children. As a reward for all their hard work, she and her husband Chris laid on a hay timing afternoon at Pry House farm for them, complete with ‘drinkings’ at the end. The children learned how to use wooden hay rakes to row up the hay, build foot cocks and jockeys – it was absolutely fascinating to watch Chris demonstrating these age-old techniques. Everyone worked really hard and thoroughly enjoyed the slap up tea that Glenda had laid on afterwards – best cheese scones ever!

We were lucky to have photographer Stephen Garnett along too to capture both the fun and the hard work. Even more amazingly, the sun shone all afternoon – we experienced a truly magical day in upper Swaledale.

It’s been a really busy week getting material ready for Muker Show, but we had to stop to go out and admire our first  two outdoor interpretation panels which were delivered a couple of days ago.  These are both going to camping businesses in the area – Swaledale Yurts and Usha Gap. Each panel features a story about a cowhouse on their site along with general information about the history of cowhouses in Muker parish.

The specially crafted stands are made from green oak which will weather to a beautiful silver grey colour over time. We’re very pleased with them and hope the businesses and their guests will be too. 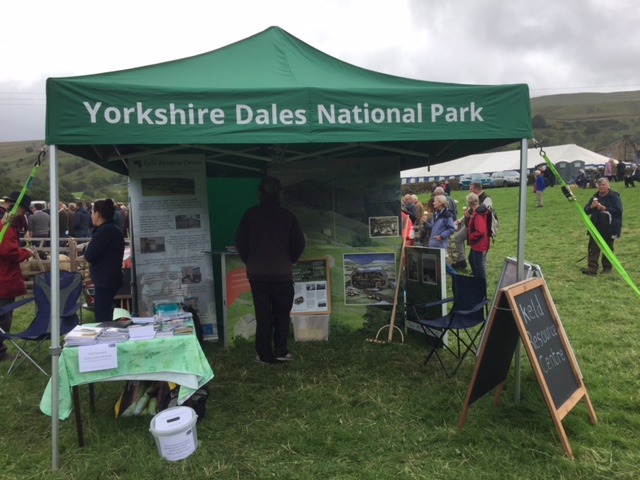 We’re just back from a wonderful day at Muker Show where we joined the good folk on the Keld Resource Centre stand. They’d brought along the new travelling display unit which was much admired and we were able to talk to lots of visitors and locals about the project. We also met several local visitor businesses and told them all about the posters and photo prints we have available for them.

Several businesses took framed items away with them and others took our special order form and will be back in touch later.