We’ve managed to lay our hands on a recording of the Cousins choir singing Geoff Garrett’s wonderful song composed for Ghost Cow Night ‘The Song of the Swaledale Cow’us’.

The choir sang it again to the audience in Keld Public Hall hence all the (well-deserved) applause.

Rather pleased with this sample just arrived from Heritage Cards, a local company producing souvenirs. Hoping to have enough produced for all the visitor businesses and organisations like Keld Public Hall that have ordered sets. 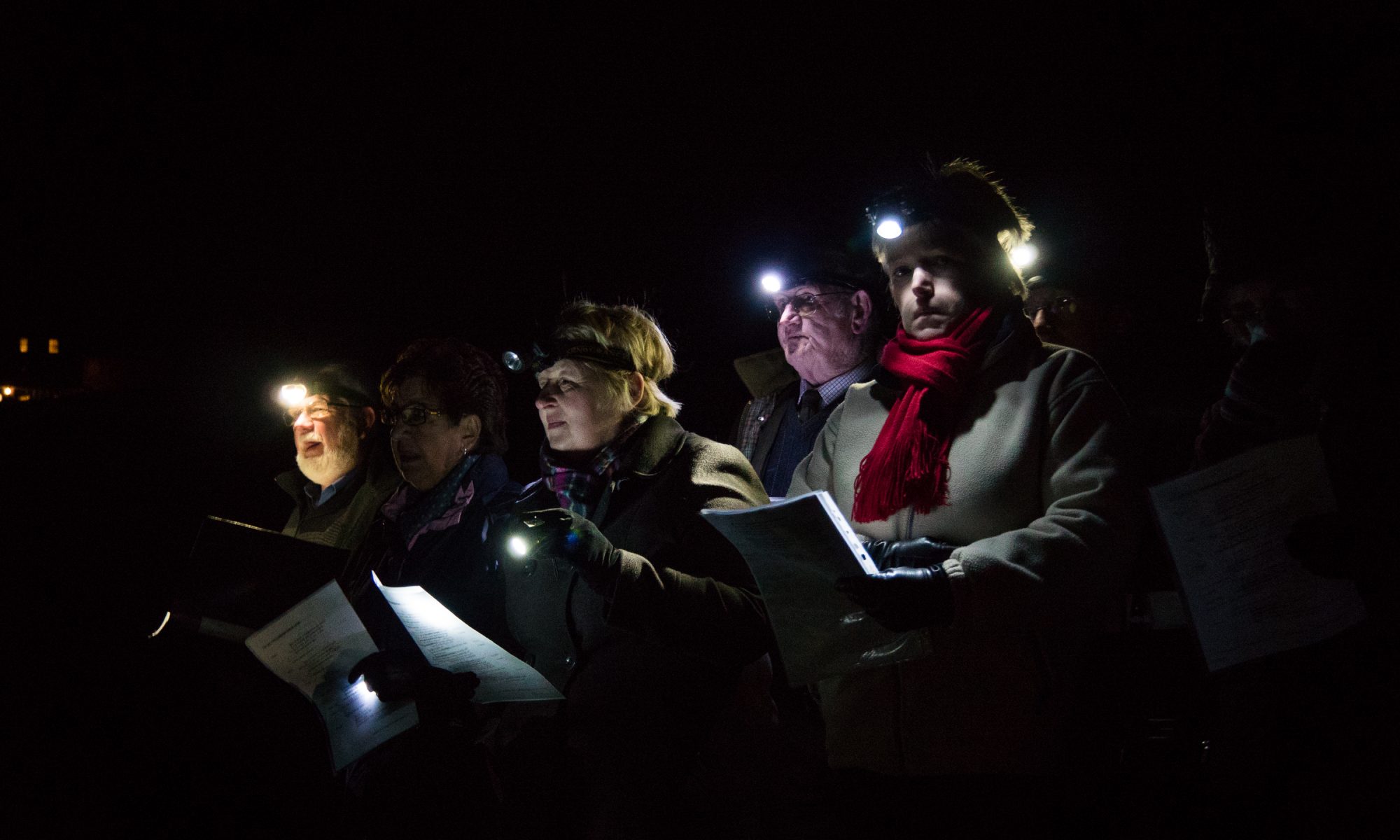 Hearing the local choir called ‘The Cousins’ sing this out into the darkness to call the ghost cows down off Kisdon was really rather special. Here are the words – we’re hoping to post a recording of the music shortly:

The Tale of the Swaledale Cow’us

There Once was a time when the old barn thrived,

Its use has gone, its time has died,

Its where the old tup hides.

The tale it tells is both old and new,

The cows, the calls and the old hay mew.

The Ghost Barn calls where e’er we roam,

The old Cow’us is home.

The long dark days were cold and grey.

The group it was always full

The kitle hangs ready for its daily use,

The Man once lish but not any more,

The days grow long, there’s the smell of spring

The curlews call and the hairbells ring,

Cows sent up til they’ve gone

Up to the hidden hill

Hays all gone, the meadows are sweet,

Cut and turned, with cocks all neat.

The sleds in use when the hay is reet

When the pig has gone and the cows re-appear.

The Cow’us is filled, each steaming boose

The cows get a canch each day

Times that are re-membered still.

Hay went in, milk came out.

Every family loved their land. 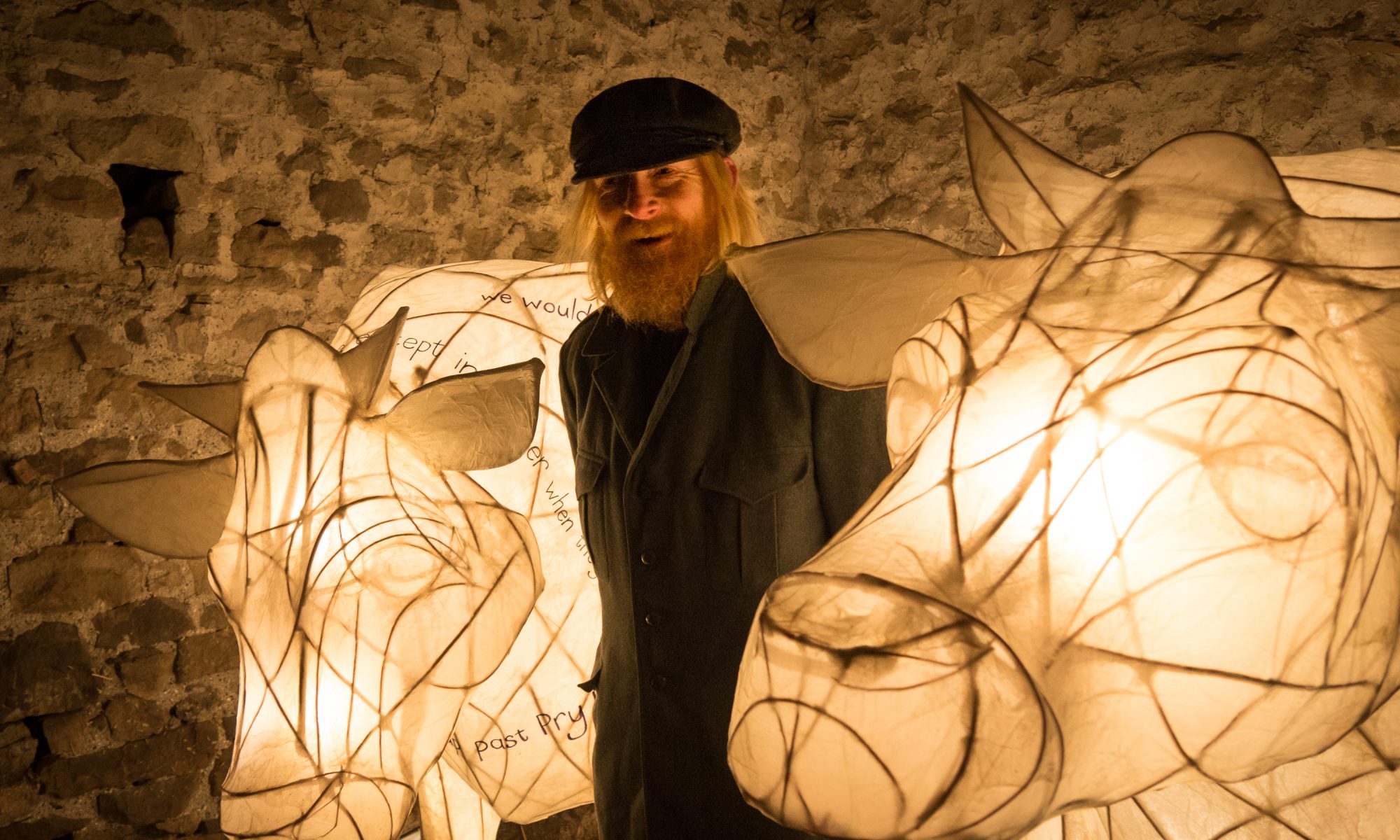 We have been sent some more lovely photos from Ghost Cow Night last week. This one shows the choir singing Geoff Garrett’s specially composed song. We’ll post the words in a separate blog.

And here is the leader of the cows, Vince Banks, a drystone waller from Walden, really looking the part

And finally a lovely shot of the crowds of people waiting for their supper in Keld Public Hall, dandelion and burdock at hand.

We’ve put out a press release ‘Ghost Cows Seen on Kisdon‘ which we hope local newspapers will pick up so more people hear about this magical evening.

We’ve already delivered sets of our Ghost Cow Night print coasters and place mats to a couple of bed & bed breakfasts near Keld and were delighted to see them in use at one over the weekend. Looking very smart we thought.

Well, the night arrived and the weather was so kind to us, cold but clear with only a light breeze. Nearly a hundred people turned up and stood in the dark beside Myers Bottom cowhouse in Keld and watched the magnificent ghost cows (and calves) wend their way down off Kisdon Hill as a local choir sang their specially composed song calling them in for the winter.

It was a truly magical sight, with one visitor quite carried away and remarking that we ought to have left some hay out for them once they were stabled in the cowhouse for the night.

Project Co-ordinator Karen Griffiths had this to say as she introduced the night:

“Over the past two years it’s been my privilege and absolute pleasure to work with many of you on the Every Barn (or should I say, cowhouse!) Tells a Story project.

As I researched the history of these iconic Swaledale buildings and above all, as I listened to the voices of the last of you to actually use them for your cattle, I began to carry those stories around with me….

Stories of taking the cows out to their summer pastures in the spring, of spreading muck on the meadows, of milking cows up on Kisdon Side, of haytiming and the hot dusty work treading hay down in the mew. And finally, memories of bringing the cattle down off the hills at the back end of the year and tying them in their booses, followed by cold winter mornings and dark winter evenings watering, foddering and mucking them out.

Every time I opened the door and stepped into one of these empty, silent cowhouses, those stories followed me like ghosts.  And so the idea for Ghost Cow Night was born, and what I hope will be a fitting celebration for the end of a truly magical project.”

After everyone admired the ghost cows snugly housed for the night, we then walked up to Keld Public Hall for a fabulous hog roast followed by traditional fruit pies plus lots of chat and some more singing and reciting of Swardle dialect poems. A thoroughly enjoyable and appropriate celebration of the end of the Every Barn Tells a Story project.

Yesterday we braved the gloom and steady rain to test out the Ghost Cow route and make final adjustments to the order of ceremonies. While the rangers were busy banging in guide posts with reflective discs on along the chosen route we tested out the electrics on the cows and calves.

We ended up drying off back in the Winter self-service tea facilities in Keld Public Hall – we can thoroughly recommend the banana bread!

The place mats that several local businesses have ordered have also now arrived .

They match the coasters we received earlier this week very nicely.

We have also had a set of souvenir postcards printed by Moo.com to hand out to people who are coming to Ghost Cow Night as a little memento of the evening.

After rather a long wait (it’s a long way from Hebden Bridge to Keld), our Ghost Cows and their calves (and not forgetting the dog) arrived last week.

They are now safely stored away, appropriately enough in a nearby empty cowhouse awaiting the big night.

This picture reminded us of a description of a local dog that we recorded in one of our audio sessions with four local women.

“When we had these little cow’usses they did get out to drink twice a day but the rest of the day they were tied up with a chain ..in the booses. Calves, they were all kept together , they were loose, you might have 4 or 5 in a calf box. Same building, they were bedded out …you used to milk the cows, to feed it back to the calves ..they didn’t seem to think to let the calves suckle!” “No, they were too wild. The calf didn’t like it out of the bucket so you put your hand in and in its mouth to get it to drink. You tried to lead them if you wanted to show them at Muker Show. You put a halter on them. They weren’t wild like today. You took a dog to round them up…you don’t go with a dog today in among any cows. Then you used your dog. We used to have a dog that used to swing on cow’s tails!”

We have been busy turning Helen Peyton’s lovely ‘Ghost Cow Night’ artwork into items for local visitor businesses to use with their guests. First to arrive today were sets of coasters which we really like.

These were requested as additional items to the mugs and placemats we’d already planned.  Businesses intend to use them in guest bedrooms.