Hogg House, Keld Side Fell
by dalesarch
on Sketchfab

Have a look at our 3d model of the Keld Side Hogg House. The model was made using a piece of software called Agisoft Photoscan, and by using digital photo’s taken on cameras provided to the project through the HLF funding.

This building is a particularly good example, similar to a number of other Swaledale Hogg Houses. It is located on an area of enclosed fell, higher ground which was suitable for pasture, but not for meadow.  The hogg house dates from the second half of the 19th Century, it is very well-built, made from quarried sandstone which was probably acquired specifically for the purpose.

Inside, part of the roof truss shows scratched markings which may indicate that the timber came from the Baltic – unusual, given that the overland journey for such a substantial piece of timber would have been quite a challenge.

The model shows the barn as it was early in 2017, with clear signs that the roof ridge needed attention. It has  been repaired this summer as part of the concurrently running ‘Muker Barns Project’, and will hopefully stay in the landscape for many more years.

A rapid trip through Muker yesterday gave the opportunity to take some photo’s of the barns and walls landscape..

Photo’s by Miles Johnson and Rebecca Cadbury-Simmons (YDNPA) – using cameras generously provided to the project via the HLF.

Cow’us  or Cowuss  (n).  pl  Cow’uses.   Term used in Swaledale and other parts of the Dales for a field barn or ‘cow-house’.

It is essential to understand that while the term ‘barn’ is casually [commonly] used to describe any farm building where hay and perhaps livestock are kept, a specialist (whether the farmer or researcher ) will differentiate between a range of different buildings in farming use.  As well as ‘cowuss’, you may encounter ‘hogg houses’ and sheep houses’ (n.b. hoggs are young sheep – not pigs!).

You might find (in Swaledale at least) that using the word ‘barn’ will get you a blank look if you’re talking about a cow’us.. 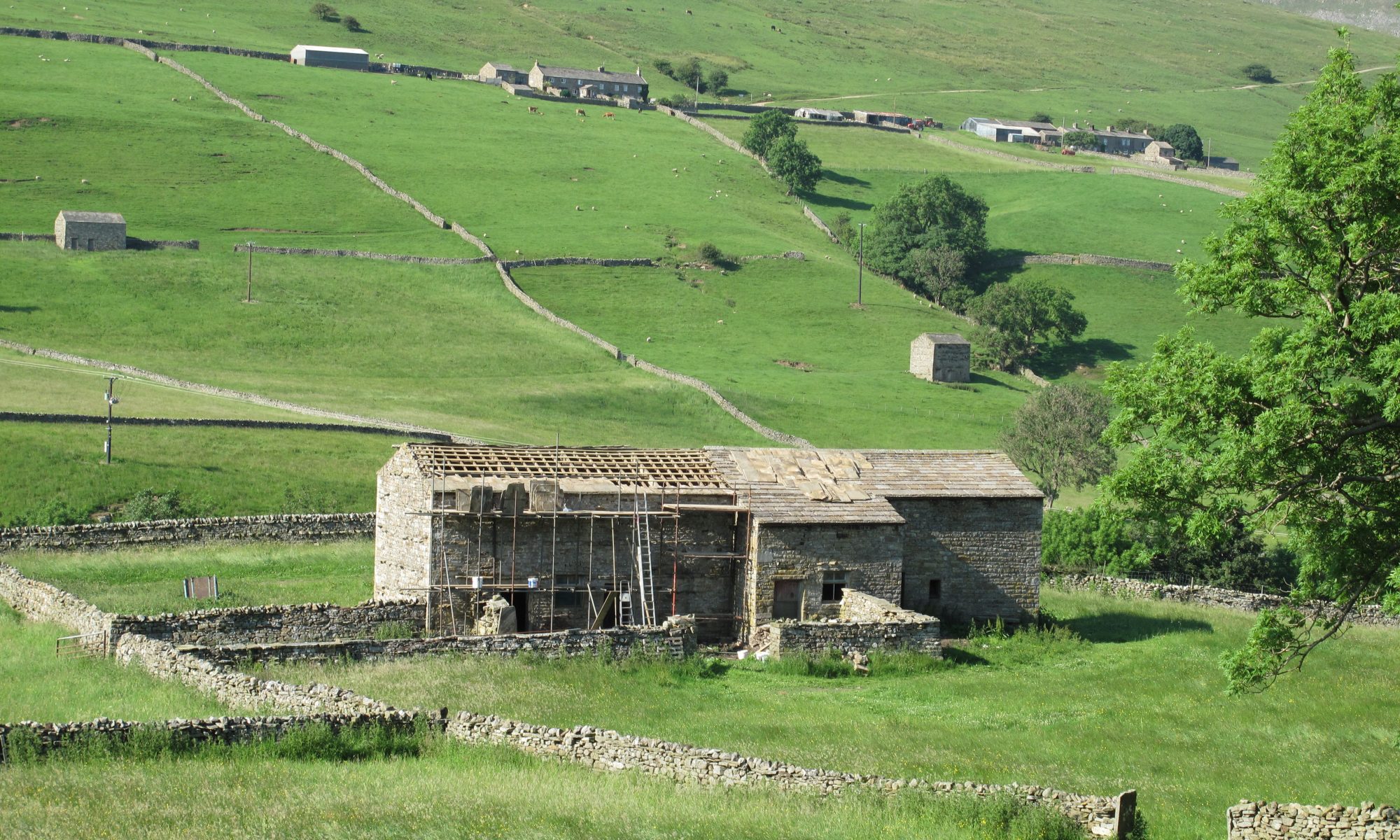 Running parallel to the EBTAS project, money provided through a Legacy is being used to conserve a number of barns in Muker Parish.

Four out of a potential eight potential building projects that have been initiated in the last month.  Although most of the work on the ground is not likely to start until spring, Gaby and Peter (the National Park Authority’s Building Conservation Officers ) have been developing specifications for the building works – assessing the barns in detail, and figuring out exactly what practical work is needed to restore the barns to top shape for the next few decades.

Alongside the assessment of building works, the barns also need to be surveyed for bats, which are protected under law – so a contractor is busy planning and undertaking  visits to make sure that the building works do not inadvertently disturb bat roosts.